I’m so torn over BuzzFeed. Every time I realize how much time I’ve wasted reading vapid listicles and start vowing to block the website to save me from myself, I run across something like the rather excellent longform piece on boomtown strippers that ended up partly inspiring my current stab at a novel draft… or today’s crucial discovery, the LATKE BURGER. (original here)

You guys, I need this inside me.

Unlike last year, I don’t get to jet off to New York on a whim this Thanksgiving, and I’m presumably spending the day at home on my own. (Don’t cry for me, Argentina. I get a Friendsgiving on Sunday, plus any day where I don’t have to put on pants is a good day in my book.) I might have to try this. I just hope it’s not completely underwhelming; it’s still a turkey burger, after all.

Ghosts of Thanksgivings past: 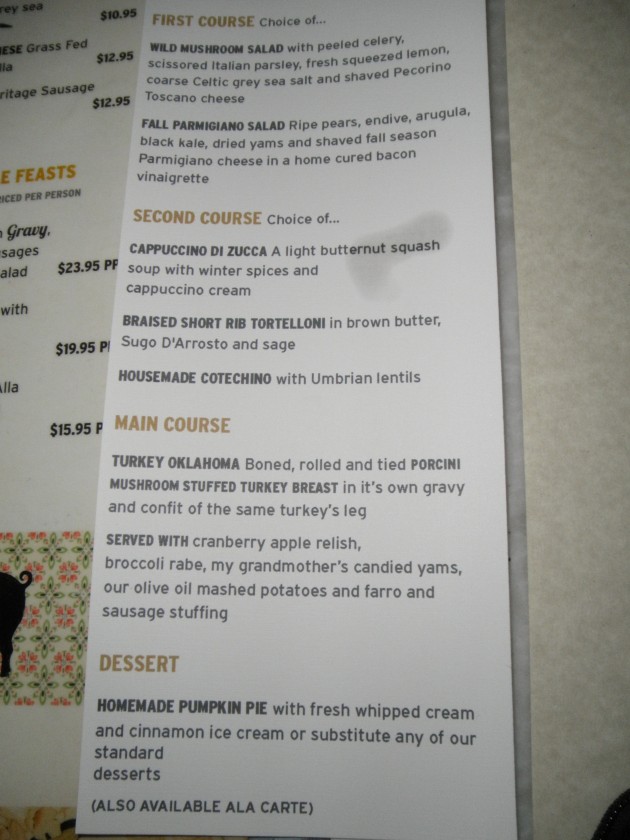 – The fall Parmigiano salad was amazing, possibly my favorite course. It was well-balanced between the bitterness of the greens, the sweetness of the pears and dried yams, and the saltiness of the Parmigiano and bacon. All of the components were distinct but none of them felt out of place. I really want to try replicating this at home.
– Much to my heartbreak, they were out of the short rib tortelloni by the time of my reservation, which wasn’t exactly late in the evening. I went with the cappuccino di zucca instead, which was still tasty if a bit heavy-handed with the salt (like, “crunching down on crystals of it” heavy-handed). Butternut squash soup isn’t exactly a novelty, though. I still mourn what might have been.
– The main course made me feel better. The turkey was awesome, which is not usually an adjective I apply to that particular bird. (Thanksgiving has always been all about the starches and cranberry sauce for me, to be honest.) I especially loved the porcini mushroom stuffing in the breast, and the leg confit was intensely savory. The farro and sausage stuffing was just what I wanted it to be, hearty and slightly spicy. Oddly, this course arrived with neither the cranberry-apple relish nor the mashed potatoes promised on the menu, but there was already a metric fuckton of food so I wasn’t inclined to complain.
– Dessert was disappointing and anticlimactic. The pumpkin pie was still partly frozen and served with coffee ice cream instead of cinnamon, which I didn’t realize until it was already in my mouth. I am decidedly not a coffee fan.
– Overall, as you can probably tell from all of the missing dishes and substitutions, I think they were probably unprepared for the volume of diners. Service was very gracious and apologetic, though, which helped. The bartender was especially awesome and turned me on to Sangiovese, which I’d never had before because I am a rube. Thanks, bartender dude!

I do want to go back to this restaurant next time I make it out to NYC, just to see what they can do on an average night. Anyway, if you’re in the area and don’t have plans for T-day and happen to be reading this for some unfathomable reason, it looks like they’re serving the same menu this year if you want to try your luck. Send me some frickin’ tortelloni. I’m not joking. I will find you.

And now for something completely different: the meal I cooked for myself and a certain sociopathic ex in 2011. Potato soup, stuffing, garlic broccoli, pumpkin toffee cheesecake, and the requisite canned cranberry sludge because I love it and it doesn’t feel like Thanksgiving without it.

I had never made stuffing before that day, since I don’t generally handle Thanksgiving cooking and I’m not a big fan of the conventional soggy-bread stuff. He wanted it, though, despite the lack of anything we might have the pretense of stuffing it in; it represented the same thing to him that the almighty cranberry cylinder does to me. So, like a dutiful girlfriend, I made it and promptly set it on a burner I’d forgotten to turn off in order to take pictures of the meal before we ate it. Half of it ended up burnt to hell. In retrospect, this seems appropriate somehow.

I’m kind of concerned by how much I can write about meals that have been digested for over a year.

As I’m sure the Internet at large has heard by now, Oxford has declared “selfie” the 2013 word of the year, breaking my heart in the process. I’m all for welcoming unconventional additions to the language, because descriptivism, but I’m also a big fan of bitching about petty annoyances, so here are more widespread words that make me want to go Fahrenheit 451 on the things I read.

millennial – Apparently I’m one of these. (Maybe. They seem to keep changing the parameters every five minutes.) Every time I hear this word, it’s being used to either disparage me or sell me shit. I don’t take nonstop selfies, I’m lucky enough to be sort of financially self-sufficient, and I don’t want to spend my not-large disposable income on your x-treme cool ranch iPhone case. Go away.

hubby – No offense meant to my friends and acquaintances who use this, but I find it creepily infantile. Whenever I hear someone say it, I briefly picture them with 27 Pinterest boards full of “recipes sure to please your man,” or with robotic mechanisms just under their flesh, or as Jean Teasdale. (In the interest of gender equality, I’m no fan of “wifey” either.)

nipple – I REALLY REALLY hate this, but I’m afraid I don’t have any amusing explanation for it. It sounds gross and reminds me of bad times with assholes. Any further explanation is outside the scope of what I’m willing to explore here.

YOLO – This is an easy target, but I have a specific reason for hating it: I grew up in Yolo County, CA, so every time I see this I get confused for a moment and wonder why anyone would find that region inspirational unless they’re a serious fan of cows and heatstroke.

artisan or artisanal – No, it probably isn’t. I’m giving you side-eye, Dunkin’ Donuts.

I’m in a rut. This has been obvious to me for a while, but it really came into clear focus on Friday afternoon, when I left work for my half-day and didn’t immediately go home. Instead, I went to the grocery store and realized how long it’d been since I actually kept food in my apartment. Then I walked home down a street I don’t usually take and realized how foreign it seemed. None of this should be novel at all, and yet…

I function at the bare minimum most of the time, if I’m being honest. I get up, go to work, come home, fuck around online, sleep, lather, rinse, repeat. I see the same things, eat the same foods, visit the same websites, fall into all the old negative patterns and habits. I talk a big game to myself about turning my life around, but the lowest common denominator is just so comfy and warm.

I realize I’m idealizing the past, but it seems like things were more interesting when everything was always right on the verge of falling apart.

Did I learn from any of this introspection and do something more exciting with the rest of my weekend? Not unless you count eating a whole roll’s worth of Pillsbury biscuits (minus the one that fell on the floor, because a girl’s got to have some standards) and sleeping for eighteen hours straight.